Home / News /What is salami made of?

What is salami made of? 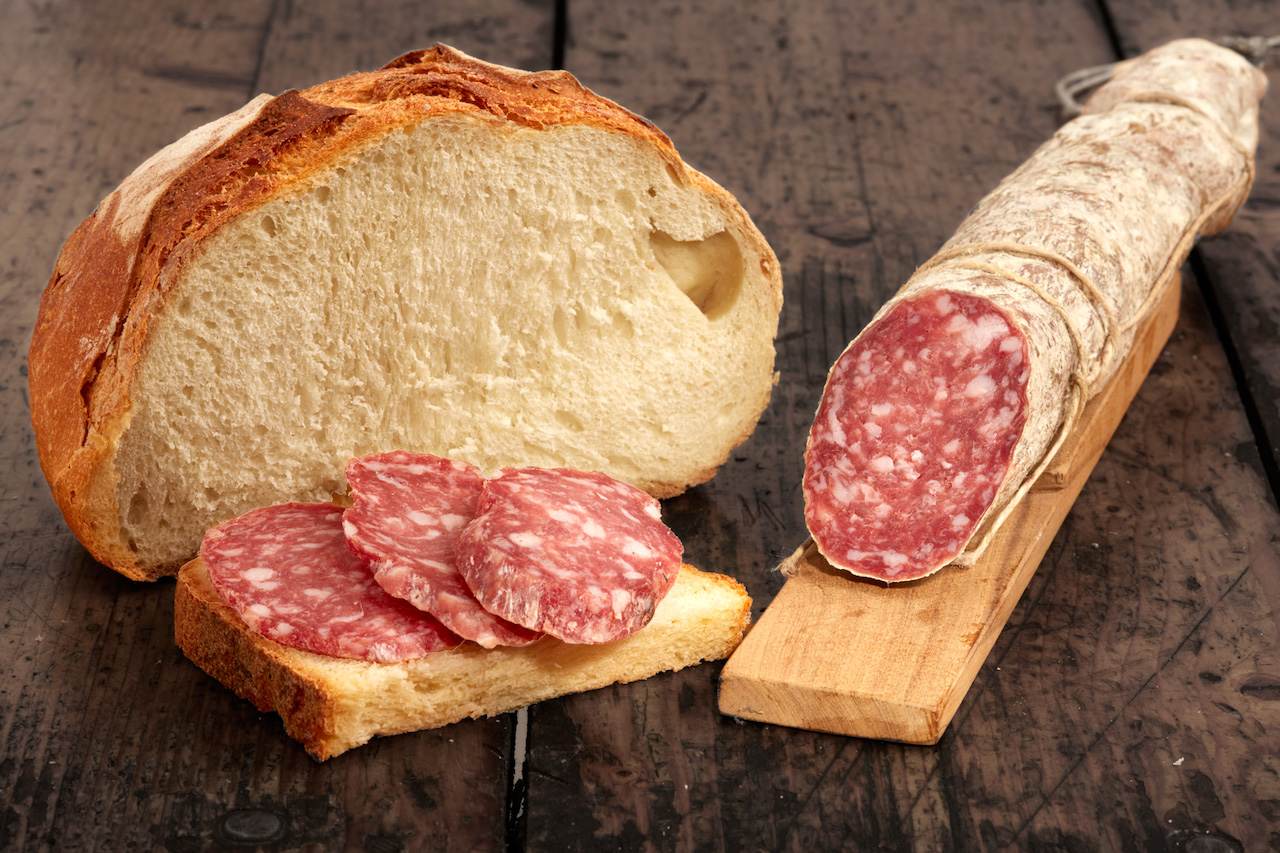 The Italian gastronomic heritage is as vast as it is ancient: cheeses, pasta, wine, olive oil are just a part of the many delicacies that have always conquered palates from all over the world.

Salami is one of the most loved and often most imitated foods, thanks to the flavour that makes it appreciated both alone and accompanied by other Italian delicacies: it’s made of pork meat, fat, salt and spices, suitably stuffed and then subjected to seasoning.

In Italy, there are various types of salami: we remember, for example, the salami of Milan, the one of Naples, of Felino and the salami of Cremona.

The origins of the salami and the chosen meats

The word salami derives from the ancient term “salame”, used in the Middle Ages to indicate the element preserved in salt (although initially, it was the fish that was preserved with this technique).

In the past, salami was prepared with leftover meat from previous preparations. Then, during the Middle Ages, the art of charcuterie perfected both in the production techniques and in the sausages themselves.

In reality, the preservation of salted meat has even more ancient origins. There are traces of it in the Egypt of Ramses III and Ancient Rome when the so-called “insicia” were consumed by the wealthiest classes during lavish banquets. In their most archaic form, they were known even in the Greece of Homer, who speaks in his Odyssey of preparations based on meat, fat and blood.

The art of cured meat during the Renaissance became a job that required regulation: for this reason, the first Corporations were born, such as that of the Lardaroli of Parma and the Solaroli of Bologna, but above all, the cardinal Girolamo Farnese issued provisions that decreed which ingredients, absolutely mandatory, should be used for the production of cured meats, including salami.

Generally, the salami is made with pork, i.e. trimmings deriving from other preparations including above all loin and shoulder: in Italy, however, there is also salami made of beef, goat, duck, goose, donkey, sheep, horse and even game (e.g. deer, wild boar, moose and hare).

The first phase of processing the salami is the choice of meats that are generally mechanically minced (there are, however, salamis where the cut is made with a knife, and this is the case of Friulian salami). It is precisely the meat’s grain (fine, medium or coarse) that distinguishes the various types of salami.

The next step is the addition of saltpetre, which is the potassium salt which is essential not only for preserving the sausage (it prevents microorganisms from altering its flavour) but also for the seasoning and the enhancement of flavours.

In addition to the salt, fat is added to the dough to give the salami more softness: it is most often taken from the finest pork cheek or the other subcutaneous areas of the pig.

Spices and aromas are those ingredients that give flavour to the salami: ground or whole pepper, fennel seeds, wild fennel, chilli, red or white wine, garlic and, as in the case of blood sausage, real pig’s blood.

Once the dough has been prepared, it is bagged inside a natural gut with a classic narrow and elongated shape: the salami is, therefore, ready for seasoning in humid and relatively cool environments, for a period that can range from 1 to 5 months (some salamis, such as casereccio, undergo a seasoning of up to 1 year).

Salami, like other sausages, although they are not suitable products to be consumed in a dietary regime, are artisanal foods and genuine if consumed in the proper doses.

In 100 grams of product, there is approximately 370 Kcal: consuming slices of salami also means taking in other vital nutrients such as B vitamins, proteins, water, carbohydrates, saturated fatty acids, sugars and mineral salts such as zinc, phosphorus, iron and sodium.

The delicacy and flavour of salami: the most popular recipes

Salami is one of the most loved Italian sausages. Tender and tasty, the salami is suitable for simple or complex dishes, according to the tastes and desires of the palate of the diners.

Like other sausages, salami can also be used to prepare delicious sandwiches, in which to add condiments and, why not, a few slices of cheese.

Leaving out the sandwiches aside, let’s discover the best recipes starring one of the most popular cured meats in Italy!

The salami for the preparation of first courses

The salami is suitable both for the preparation of first and second courses. Moreover, this variety allows it to establish itself as a versatile food that satisfies the palate of the most demanding diners.

Regarding the first courses, salami is generally used in the preparation of condiments: this is the case, for example, of spaghetti with salami, with the sausage cut into slices and combined with threadlike pasta; but it is also the case of the penne with salami sauce.

As with other meat-based sauces – think of the famous ragù, be it pork or wild boar meat – salami can also enrich the flavour of the tomato sauce.

The cream produced by the combination of salami and sauce will have an inimitable taste and can be further enriched by the addition of black olives: the final product will have a truly fantastic taste!

The salami for the preparation of main courses

As already mentioned, salami is also helpful for the preparation of main courses. In this case, there is no shortage of possibilities to create unique dishes with a tasty flavour, starting with the sausage for savoury pies.

An example is a savoury pie with salami and potatoes: the delicate taste of the tuber will bind perfectly with the intense flavour of the salami, in a mix that the puff pastry base will enrich.

Particularly tasty, among others, are the potato rolls with salami and cheese. In this case, the two foods mentioned above are combined with the dairy product, guaranteeing a new combination with a strong and very appreciable taste.

As we said earlier, there is no shortage of alternatives for the preparation of salami-based dishes. The sausage is perfect for a wide range of different preparations, allowing those who cook to indulge themselves and free their imagination.

And here, by combining the salami with other ingredients, it becomes possible to prepare a rich omelette with salami or pasta with salami and scamorza cheese; and why not try fusilli with salami and irpina ricotta? The smoky flavour of the sausage will blend perfectly with the delicacy of the dairy product.

In short, an ingredient such as salami cannot be missing in any kitchen. We are talking about a sausage for first or second courses, which can also be enjoyed in sandwiches or with a few cheese slices.

Salami is one of the best sausages of Italian charcuterie, thanks to their irresistible scent, the generally bright red colour and the flavour in front of which few can resist.

Behind this salami lies a very long history and a passion, handed down from generation to generation.