Home / News /Lardo di Colonnata preparation: find out how Lardo is made

Lardo di Colonnata preparation: find out how Lardo is made 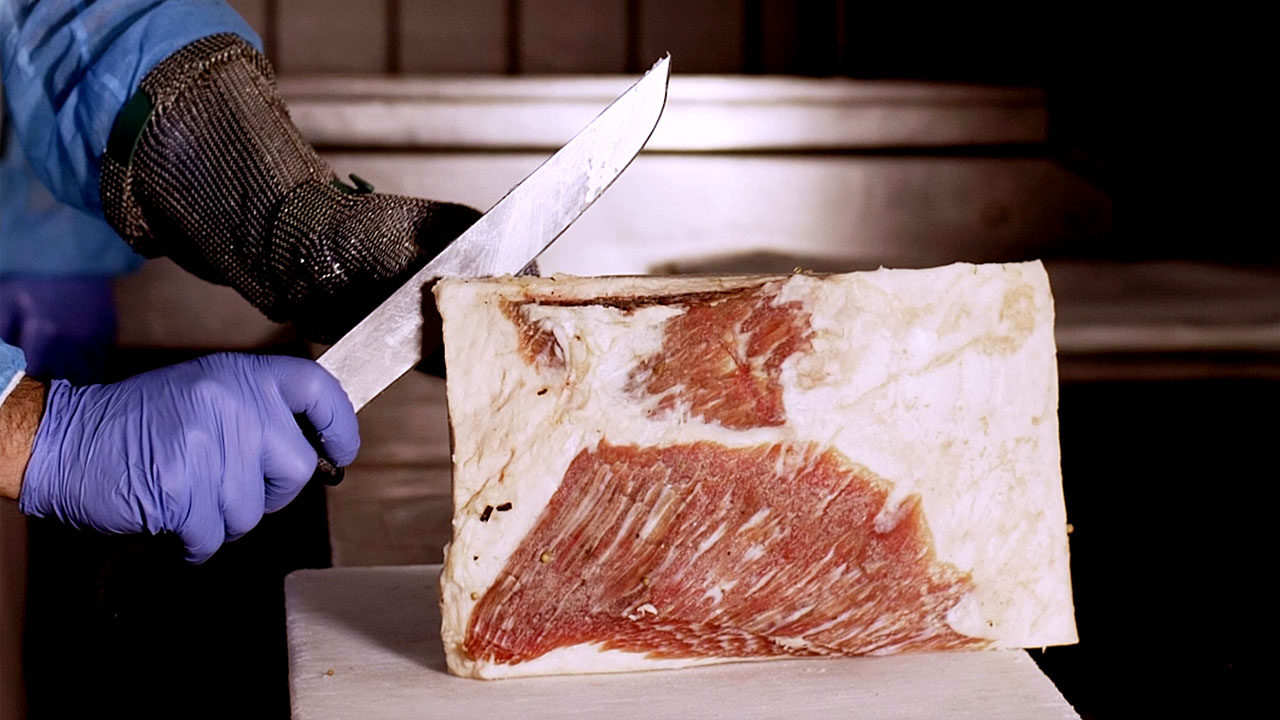 Lardo di Colonnata‘s origins are rather mysterious: some trace it back to the Roman period, while others opt for Celtic-Lombard roots or the 19th century.

Nowadays, this poor nourishing dish, nowadays true gastronomic excellence with Protected Geographical Indication, was born as the quarrymen’s food who sweated to extract the marble.

It was linked to the St. Bartholomew’s feast, also the butchers’ patron saint, and to the adoration for St. Antonio Abate, who gave healing to those who placed a slice of Lardo di Colonnata on their sacred fire wounds.

It has a vaguely rectangular shape, at least 3 cm thick and brownish-white in colour, with a thin pink part representing the leanest Lardo di Colonnata’s part.

The upper part is covered with aromas and salt, while at the bottom, there is the pork rind: the texture is soft, the scent releases an unmistakable fragrance, while the sweetish taste finally reveals a certain flavour, giving a sensory experience to be tried.

How Lardo di Colonnata is born

Lardo di Colonnata PGI is a typical cured meat from the Tuscany village of Colonnata, located in the Apuan Alps’ shadow, in the province of Massa Carrara. The town, also popular for the marble’s extraction used by artists like Canova and Michelangelo, is dotted with dozens of lard workers who carry on the centuries-old tradition in their workshops: the Lardo di Colonnata’s production.

Those dorsal adipose layers that start from the occipital region up to the buttocks, including the pancetta, are taken, preferring the Sus Scrofa Domesticus breed. The choice of meats is essential to ensure that Lardo di Colonnata maintains all the organoleptic properties that make it so appreciated.

After choosing the meats, they must be processed within 72 hours, preferably between September and May. After trimming, which involves eliminating the spongiest parts, the meat is cut into pieces of about 7 kg each and massaged with coarse salt.

The next step is putting the cuts into vats made of marble from the Colonnata Canaloni, whose grain allows for perfect seasoning. However, these hollows must have been prepared with a “shirt” or rubbed for 6 months with fresh garlic.

The lard is laid out in layers in the tubs, alternating them with a mix of aromas like pieces of garlic, fresh rosemary, and pepper: each larder or family has its recipe, which can also include the addition of sage, cinnamon, cloves, and coriander.

After covering the tank with a marble slab, the seasoning begins, which lasts from 6 months to 3 years: the ideal time is 2 years so that the Colonnata lard is not too aromatic.

Lardo di Colonnata PGI represents a highly lipidic and decidedly energetic food: it is no coincidence that it was born as the quarrymen’s food. Many mistakenly compare it to olive oil, unlike which it contains saturated fatty acids and cholesterol.

Although this cured meat counted not among the meats, the seasoning oils and fats can be consumed without particular anxiety by those who are not obese, do not suffer from certain cardiovascular and metabolic diseases. The important thing is not to overdo the quantities, limiting them to two thin slices once a day.

It must be clarified that Lardo is much healthier than any coconut or palm oil contained in many foods that are consumed daily. Furthermore, Lardo di Colonnata PGI is a genuine product, not industrial and without preservatives.

From a caloric point of view, 100 grams of lard contains approximately 891 Kcal. It also contains sodium (due to aging), cholesterol, and small amounts of potassium and proteins. Lardo di Colonnata PGI is also free of gluten and lactose, and, concerning its consumption, there are no allergic reactions.

Lardo: one product, a thousand recipes

When you enter one of the lardaioli shops in Colonnata, usually, you can taste the lard in purity, that is raw and cut into thin slices, in addition to appreciating the irresistible this ancient salami’s aroma: it is usually used on hot croutons, maybe with a drizzle of organic honey to enhance the flavour given by the salt, spices, and herbs used for seasoning. The quarrymen ate the lard just on toasted bread and with an unripe tomato on top in the past.

Lardo di Colonnata can also be cut with a knife or melted directly in a pan, as if it were a natural seasoning oil: nowadays, dehydrated fruits are also used, such as plums, instead of the tomato, to have an original mouth-watering appetizer.

Lardo di Colonnata PGI then goes perfectly with legume-based soups, wild meats, and white ones, which are more flavoured than this cured meat.

We always think of lard combined with meats, but today we dare to connect it with fish such as sea bass and monkfish, but above all with shellfish, for a truly surprising flavour.

As for the wines, the most recommended enhancing the Lardo di Colonnata’s flavour is a glass of fresh Valdobbiadene Prosecco, Barbera, or Amarone, with a strong and full-bodied taste.

Among the oldest dishes linked to the Italian gastronomic tradition, Polenta and Bruscitt: this Lombard dish, specially prepared in Busto Arsizio, is energetic and rich and is made with polenta and strips of beef.

In the past, women engaged not only in housework but in hard work in the fields next to their husbands, putting the meat to cook from the morning on the low hearth’s fire. When they returned, everything was ready in the evening, and they did not have to cook anything.

To prepare Polenta and Bruscitt, it is necessary:

Those who love the bakery, but want to surprise diners with something original and very tasty, can prepare a loaf filled with Lardo di Colonnata and figs. This recipe is ideal for serving at the table and other bread or as a very energetic snack.

The ingredients to prepare this type of bread are:

When the holidays arrive, and you have guests in the house, you always look for a way to surprise the guests with tasty but original dishes.

Roasted guinea fowl is not only a dish with a great amazing effect (it is often seen next to turkey on the American tables on the occasion of Christmas or Thanksgiving). But it is also very tasty and flavourful, especially thanks to Lardo di Colonnata IGP.

To prepare it, you need:

According to the legend, the guinea fowl was born from the Meleager’s death, one of the mythological Argonauts: his sisters, knowing about his sudden departure, shed so many tears that gods, pitying, turned them into guineafowls.