Home / News /What are cured meats

What are cured meats 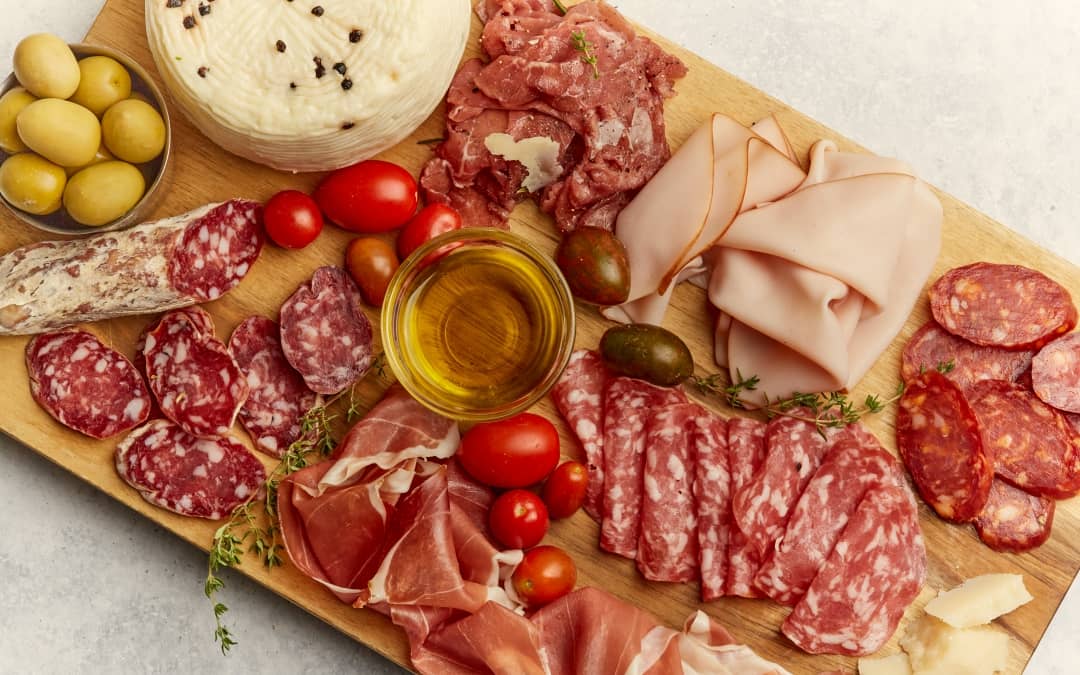 The term cured meat is commonly used to indicate food preparations based on cooked or raw meat in which the taste is enhanced through the use of salt and spices.

The function of these two ingredients is crucial to the development of unique organoleptic/sensory properties that make one cured meat product different from another.

The recipe of each charcuterie producer is secret and considered to be the added value that sets it apart from others.

Italy is one of the largest producers of cured meats in the world, thanks to precise specifications that regulate production and all related steps. The meat comes from cattle, pigs, sheep and goose farms.

However, there are also sausages made from game meats, such as wild boar, venison or roe deer. Every region has its own cured meats.

They represent the heritage that is handed down over time through the brand that identifies the link with the territory: DOP or IGP.

Knowledge of the chemical characteristics and nutritional values of cured meats is increasingly important for consumers. The conscious consumption of food is typical of modern society, which is always attentive to its food choices.

Cured meats are foods characterised by their particular appetizing quality and associated with the prevailing lipid component. The macronutrients to be referred to establish the nutritional value of deli meats are water, proteins, lipids, sugars, mineral salts and energy.

Cured meats are not all the same as they differ in terms of the processing method and sodium content. For example, low-fat cured meats such as Bresaola and Prosciutto are better recommended than others which, for preservation reasons, must contain additives and antioxidants.

In general, it can be said that all cured meats contain varying amounts of proteins of high biological value and B vitamins. The minerals present are iron and potassium of varying concentrations.

Raw meat itself is devoid of scents and flavors. Let’s try to understand, therefore, how it is possible to produce true gastronomic excellence starting from one cut rather than another and from cooking rather than raw processing.

In both cases, there are chemical transformations responsible for the nutritional content of the cured meats we are going to taste. Cooking meat has two functions: it kills the microbes and bacteria that can attack it, and it breaks down the chemical structures of the enzymes present, which are often the cause of degradation and rancidity.

During cooking, the Maillard reaction is triggered: the amino acids that make up the meat proteins react with the sugars. The result is a concentration of aroma and flavour that makes it tempting to taste the sausage.

Cooked sausages are whole parts that are injected with brine and left to rest for 24 hours before cooking at 70°. Cooked sausages, on the other hand, range from a few hours to 2 days.

Raw sausages undergo the process of salting and drying, which is based on the addition of salt and spices. Salami, being a sausage, is prepared from the meat without tendon parts and minced. Fatty parts are then added in order to obtain the typical eye formation.

In traditional practice, no microbial starters were added but a natural, wild flora is activated. Today, however, the need to standardise the product leads to the use of selected strains that allow it to be preserved over time.

Nitrites and nitrates of sodium and potassium are added to maintain the bright colour. Uncooked salami such as prosciutto crudo, bresaola and speck undergo salting, drying and maturing.

Cured meat and sausages: the differences

A cured meat product is generally understood to be a product obtained by processing a specific anatomical part of the animal. Among the most used parts are the thigh, the hip tip, the rump, the lean meat, the belly and the neck.

Sausages, on the other hand, are obtained from the noble and less noble parts of the animal. They can be eaten fresh or aged. Fresh sausage, for example, is cooked in various ways.

Salami, on the other hand, undergoes a similar process but must be preserved to maintain its characteristics and delay its consumption. Cotechino and Zampone are cooked sausages made from pork.

In the case of Zampone, the casing containing the prepared and flavoured paste is made from the pig’s foot. Cotechino, on the other hand, involves a paste prepared from pork, rind and bacon.

So, by sausage, we mean any meat-based preparation that is placed in a natural or synthetic casing. In order to better understand the difference between the term cured meats and sausages, it is necessary to refer to the type of processing undergone by the meat.

It is not that sausages are not cured meats, but we only want to refer to the fact that the meat is stuffed after more complex processing.

Unstuffed cured meats do not undergo any particular manufacturing process. The cured meat tends to keep its original shape without undergoing major changes. For example, raw ham is easy to spot at the supermarket counter, just like capocollo, rump, bacon and so on.

Let’s now get to know some of the non-packed cured meats better through their names and designations:

Sausages and their types

Sausage meats come from the preparation of a paste which is then stuffed into casings made from the large intestine, small intestine, bladder and stomach. The meat is passed through a funnel and reduced into more or less large cubes.

As already mentioned, the addition of additives and preservatives is necessary to counteract the start of chemical reactions that could spoil the meat, making it inedible. The most popular cured sausages are:

The nutritional benefits of cured meats

Considering the various categories of cured meats whether they are cured or not, it is not possible to give them a single nutritional parameter. The differences between one type and another are substantial, so it is necessary to distinguish for some of them the actual contribution in nutrients and benefits.

Indeed, the fat and salt content may interfere with the diet of some people rather than others. Conscious consumption, however, helps to enjoy these unique culinary delights.

Their protein content makes them food rich in energy and nutrients of high biological value. Iron and potassium are recommended in cases where mineral salts are needed, such as by pregnant women.

In this case, cooked sausages are recommended for extra safety. Lean cured meats with a fat content of less than 30% such as bresaola or roast turkey rump are also recommended in low-calorie diets.

However, the recommended consumption is no more than twice a week. Cold cuts and sausages, despite their high salt and fat content, can be eaten safely, but only in moderation.

Of course, it is not the case that we should lump all salami and sausage products together. Raw ham, for example, has far fewer calories than pork neck and pancetta. The same applies to cooked ham compared to Speck.

Cured meats are an extraordinary world that enchants the mind and palate. Before the flavour, both sight and smell are enraptured. Their unmistakable aroma makes the mouth water even without seeing them.

The pleasure of tasting them is unparalleled. The recommendation, however, is the conscious consumption of these foods rich in salt, spices and additives.

As with all other culinary delights, the saying “Too much is too much” applies. One slice indeed leads to another, but one must also realise when to say enough is enough.