Salumi Pasini and Davide Oldani together for a gourmet sandwich 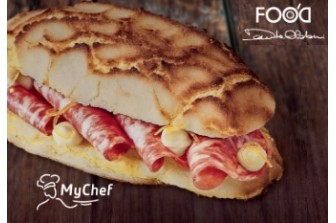 Salumi Pasini renews its collaboration with chef Davide Oldani, a collaboration established in 2014 with the creation of the Salumi Pasini FOO’D line, a line that combines the tradition of the butcher art that the Trezzano sul Naviglio company has been carrying on for 70 years for three generations and the sophisticated touch of the star chef.

Today, a new opportunity to renew the commitment to transmitting the values ​​of tradition, excellence and quality by creating an exclusive sandwich with one of the cured meats made together: the fillet salami. The other ingredients? FILLET SALAMI, LEMON BUTTER AND RICE BREAD, a unique and gourmet touch to a classic of the Italian life style.

The sandwich will be present in more than 60 stores in the Areas Italia – Mychef restaurant chain, covering the main traffic junctions from Northern to Southern Italy. A limited edition for the summer time that will offer a special taste to travelers who will move between airports, railways and highways along the “Bel Paese”.

A collaboration that comes from the desire to offer a product that differs from the classic offer and that can accompany travelers with more taste throughout the summer.

Davide Oldani, creator of pop cuisine – high quality and accessibility – opened his restaurant, the D’O, in Cornaredo, in the province of Milan, his country of origin. After a year of activity, the most authoritative food guides count him among the great chefs of Italian cuisine. The experiences prior to the opening of the D’O had seen him alongside Gualtiero Marchesi, Albert Roux, Alain Ducasse and Pierre Hermé. In December 2008 he received the golden Ambrogino from the Municipality of Milan. In November 2013 he was invited to Harvard to talk about his entrepreneurial experience following a case history on his restaurant published in the Harvard Business School Review: university economists defined his approach and his work organization applicable to different categories and not just catering. In March 2015 he also gave a lecture at the University of Parisian Business HEC. In May 2014 he saw the creation of the Davide Oldani Cafè – in the new Luxury Square of​​Malpensa Airport in Milan. He was named Ambassador EXPO 2015. He published Cuoco andata e ritorno (2008), La mia cucina pop, L’arte di caramellare i sogni (2009), Pop. La nuova grande cucina italiana (2010), Il giusto e il gusto (2012), Storie di sport e cucina (2013), Chefacile (2013), Pop Food (2015), D’O eat better (2016), Le D’Onne lo sanno (2018). In 2016 he inaugurated a restaurant in Manila and opened his new D’O, an evolution of the previous one, to be able to create a “bigger” kitchen, able to compete with other kitchens in our country and beyond. In the summer of the same year he was appointed by the CONI Food & Sport Ambassador and called as chef at Casa Italia for the Olympics in Rio de Janeiro. His activity as a designer, born from the daily observation of the guest, mirrors the one of a chef. Tables, chairs, plates, cutlery and glasses are inspired by POP: simple, functional, elegant. The brands created for the design are: “IDish” – “assiette D’O” – “H2D’O”. The new formats with: “FOO’D” – “Davide Oldani Cafè” – “CucinaPOP”.

Areas Italia – MyChef is a historic Italian company with over 20 years of experience and presence in the commercial catering market; its core business is travel retail. One of the major strengths of Areas Italia – MyChef has always been the ability to design, develop and manage innovative retail formats, in fact its offer is never the same but customized according to the needs of its stakeholders. The experience of Areas Italia – MyChef starts with the development and management of catering formats in shopping centers and over time it increasingly focuses on the concession business starting from the highways and then becoming a leader in airports and arriving at railway stations . Today Areas Italy – MyChef develops a business volume of 180 million euros, serving 50 million customers a year in over 170 stores.

SALUMI PASINI is the brand of excellence of Smapp S.p.a., a reality present on the Italian market for seasoned and fresh sausages for 70 years. The brand was born from an idea of ​​the new generation of the Pasini family to make the company known by all the public. The brand offers a line of seasoned and fresh products, created from highly selected 100% Italian raw materials. Along with the range of tradition there is an exclusive line created together with the starred chef Davide Oldani, where the ingredients and traditional processes have been revisited together in order to create new balance of taste. Salumi Pasini has its headquarters in Trezzano sul Naviglio, in the province of Milan. All its lines are produced strictly in Italy and are free of allergens (including gluten and lactose) and GMOs.