Taleggio PDO is a typical Italian cheese which, as required by the Disciplinary, can be produced and aged exclusively in Lombardy, Piedmont and Veneto and obtained only from Italian cow’s milk coming from these specific provinces.

It is a soft, uniform and compact cheese made from whole, raw or pasteurized cow’s milk.

Taleggio is characterized by a sweet and slightly aromatic flavor. It has a good digestibility and is a food rich in minerals, proteins, as well as being very energetic. Its rind is edible as it is made exclusively with salt and water.

Excellent to savor alone and suitable in the kitchen for many types of recipes or uses thanks to its meltiness. Try it to flavor first courses, such as risotto, or it is perfect with polenta. It is also excellent at the end of a meal accompanied with fruit such as apples, figs and pears.

This cheese must be kept in its paper because it allows the passage of air until the moment of consumption, being a “live” cheese it continues its maturation for some time.

The production of Taleggio PDO begins with the coagulation of the milk (raw or pasteurized) followed by the breaking and extraction of the curd. Then there is the stewing, which can last from 8 to 16 hours, during which the cheese is branded, in accordance with the provisions of the Regulations. Finally, the last two steps are salting and maturing for a minimum of 35 days in cold and humid environments.

Originally this cheese was called stracchino, from the term “strac” which means “tired”, to recall the tiredness of the cows returning from the mountain pastures. It was at the beginning of the twentieth century that the cheesemakers of Val Taleggio, in the Bergamo mountains, decided to give it the name that still distinguishes it today. Its production was born from the need to keep the milk produced by cows longer. The cheesemakers, therefore, used the milk they had in excess to produce this cheese and matured it in the characteristic caves in the valley. 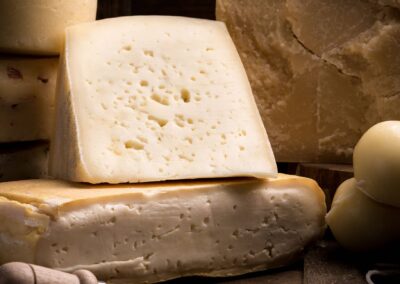 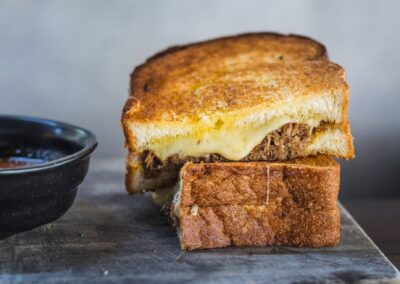